Do you want search ?

3 Reasons Why I’m Not A Feminist 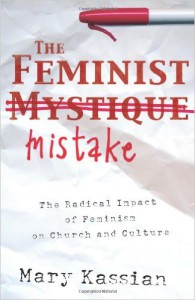 Feminist. That word is emotionally charged, isn’t it? Some women embrace it proudly and boldly. Others may identify with some feminist ideals but distance themselves from the word. Still other women resent any tie to feminism and see it as an affront to womanhood. And I think most men just run far, far away from this conversation.

January’s Book of the Month is The Feminist Mystique Mistake: The Radical Impact of Feminism on Church and Culture by Mary Kassian. As you can tell from the title, it counters ideas presented in Betty Friedan’s 1963 book, The Feminist Mystique, which sparked the modern feminist movement. Kassian provides an excellent and thought-provoking look into the history of modern feminism and the implications on society today. It’s a bit academic, so don’t start it expecting a beach-read. Yet, it is immensely informative, challenging to mainstream culture, and well worth the time.

So, preliminarily, what is feminism? If it were defined simply as promoting the dignity and worth of women, sign me up. That is not, however, what it has come to mean. Rather, feminists promote “equality” between the sexes in all areas of society, but by that, they typically mean an elimination of gender – they’re not really advocating “equality” so much as “sameness.” Feminism has also become synonymous with liberal ideology and politics.

In short, here are 3 reasons why I’m not a feminist:

That being said, the modern feminist movement shed light on matters that did (and do) deserve attention. Men have not always handled their role well or treated women with sufficient respect. Of course, that is not okay. I just don’t think the remedy is to eliminate womanhood; instead, we should increase our focus on true masculinity and femininity.

Whether or not you consider yourself a feminist, have you taken time to understand the roots of the modern feminist movement? If you have and hold to your beliefs, I respect that completely. We’ll agree to disagree. What concerns me is that feminist thought has been so forced and ingrained into our culture that few stop to consider what it really means and how it’s affecting them.

I highly recommend this month’s book. You can get a copy of The Feminist Mystique Mistake here.

I would love to hear your perspective – Do you consider yourself a feminist? Why or why not?

Very thought-provoking and, for me, hard to find fault with. I appreciate your respectful tone and invitation to civilized discourse -- which one doesn't often see on this topic.

Thanks so much, Sue! These conversations can be so heated, which is not a benefit to anyone! Hopefully, we can change that a bit. Thanks for your thoughts!

Your email address will not be published. Required fields are marked *

I am a lawyer for work and a writer for fun. I have a …Read more >>

Book of the Month

I will not sell or abuse your email address.